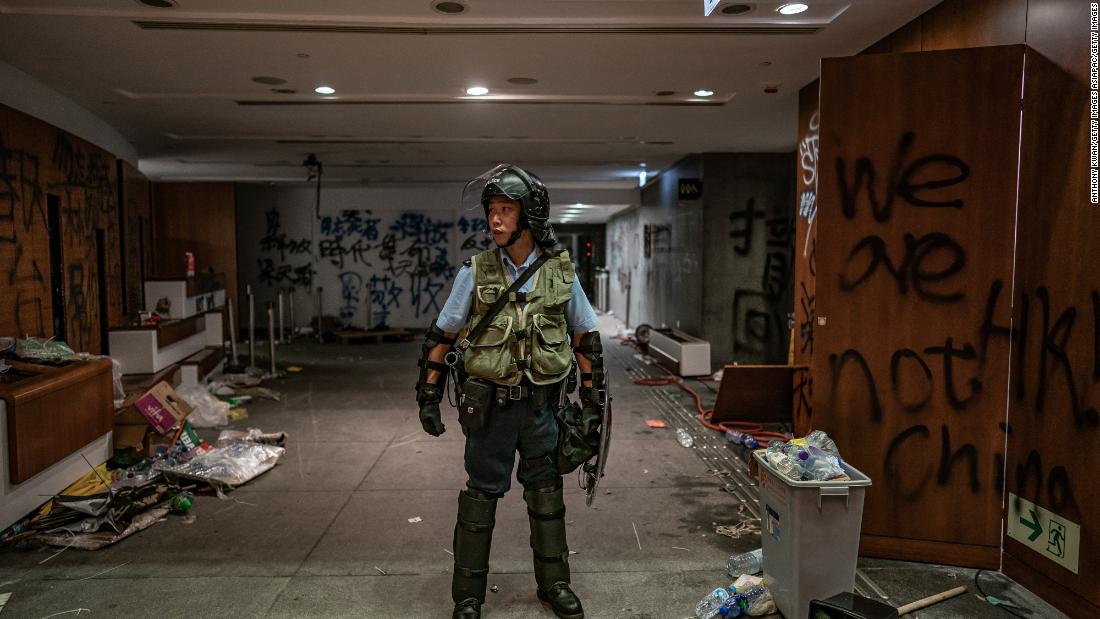 Hong Kong (CNN)A diplomatic spat between the UK and China deepened Wednesday after London summoned the Chinese ambassador over what it said were “unacceptable and inaccurate” comments made by Beijing regarding the UK’s role in ongoing Hong Kong protests.

Hundreds of thousands of Hong Kongers have taken to the streets in recent weeks over a proposed extradition bill with China critics fear would be used to go after political dissidents. On Monday, student protesters stormed and briefly occupied the city’s legislature, causing widespread damage to the building and its contents before retreating in the face of a large police clearance operation.
Referencing the Sino-British Joint Declaration of 1984 which governs the handover of Hong Kong from British to Chinese rule, Hunt said on Tuesday that “there will be serious consequences if that internationally binding legal agreement were not to be honored.”
“The UK signed an internationally binding legal agreement in 1984 that enshrines the ‘one country, two systems rule,’ enshrines the basic freedoms of the people of Hong Kong and we stand four square behind that agreement, four square behind the people of Hong Kong,” added Hunt, who is campaigning to be the next British Prime Minister.
His comments were greeted by outrage in Beijing, which has previously suggested the treaty — which established a guarantor and observer status for the UK over its former colony — is no longer applicable.
Foreign Ministry spokesman Geng Shuang on Wednesday accused Hunt of “fantasizing in the faded glory of British colonialism and obsessed with the bad habit of criticizing and lecturing on other countries’ affairs condescendingly.”
China’s ambassador to the UK, Liu Xiaoming, followed up with his own criticism, blasting London for its “interference” in Hong Kong and saying the UK-China relationship “has been damaged” because of it.
“I think it’s totally wrong for Jeremy Hunt to talk about the freedom (of Hong Kong protesters) … this is not a matter about freedom it’s a matter about breaking laws in Hong Kong,” Liu said. “We all remember what Hong Kong was 22 years ago under British rule, there was no freedom (or) democracy.”
The UK did not fully democratize Hong Kong during over a century and a half of colonial occupation, only introducing the limited form of democracy that the city enjoys today in the decade leading up to the 1997 handover. Chris Patten, the last colonial governor, did attempt to introduce greater democracy and political freedoms, against London and Beijing’s wishes, but his reforms were rolled back when China assumed control of the city.
Liu, who has since been summoned to meet with the UK Foreign Ministry, called on London to “reflect” and “refrain from further damaging the relationship” and “refrain from interfering in Hong Kong internal affairs and Chinese internal affairs.”
Responding to his comments on Twitter, Hunt said that “good relations between countries are based on mutual respect and honoring the legally binding agreements between them.”

How To Be A FUN Wedding MC is jam packed with checklists, activities, scripts, and step-by-step procedures that guide you through [...]
Read More
⇛ view similar products
Instagram Make Money Secrets

Reveals how YOU can make between $700 and $1500 each month just by taking Awesome Photos with my Instagram Account.[...]
Read More
⇛ view similar products
Instagram Make Money Secrets

Reveals how YOU can make between $700 and $1500 each month just by taking Awesome Photos with my Instagram Account.[...]
Read More
⇛ view similar products
The Ultimate Energizer

If you are an active seeker on how to become energy independent there is a chance that you might have seen this... even though th[...]
Read More
⇛ view similar products
The Best Article Spinner

Content Professor is a technology, which features one-of-a-kind database that can give you high-quality spun articles. If you're a[...]
Read More
⇛ view similar products
The Best Article Spinner

Content Professor is a technology, which features one-of-a-kind database that can give you high-quality spun articles. If you're a[...]
Read More
⇛ view similar products